The land is holy and such miscellaneous (Israel)

Why are you flying? Why you? Who was collecting the bag for you? ..- A young man in a strict suit asked questions quickly and looked at me point-blank. At first I was confused. I was interrogated for the first time with passion. And not on passport control somewhere in the USA or Canada, but in his native Pulkovo, in the boarding area. But then I remembered that I was not flying somewhere, but to a country where an undeclared war has been going on for several decades, and peaceful people only a week ago were killed in a terrorist attack. To Israel.

A few minutes later, my answers seemed to satisfy the security staff, and after checking my travel bag, I was missed for boarding. By the way, I flew the Israeli airline ElAl, and this explains a lot. Later, I learned that ElAl is famous for its security service, which she carries with her on every flight to a foreign country. These guys are excellent psychologists, they calculate potential terrorists by the external signs of behavior. Maybe that’s why, in the entire history of the airline, no terrorist act was committed on its flights!

Walking along the long sleeve of the ramp, I was already mentally prepared to meet machine gunners and “khaki” seats on the plane. But in the cabin, pretty flight attendants smiled, and the upholstery of the seats and pillows with rugs set up a pleasant flight.

The last remnants of tension evaporated after a cartoon was broadcast on the monitors, in which a miniature stewardess flew from passenger to passenger in the form of a caring bee, showing how to fasten a seat belt, inflate a life jacket and get an oxygen mask. Well, in general, the usual preflight briefing, during which our passengers usually read the newspaper, with anguish, look out the window or pour on the first one. Probably, everyone just doesn’t even want to think that things will really come to all these masked vests. And if it comes, it is unlikely that they will help someone already … I like this cartoon, like the neighbors around me, with interest. The bee was really cute and funny.

Four hours flew somehow imperceptibly while watching a movie, lunch and a short nap. Finally, the commander of the crew announced the start of the descent and asked them to raise the curtains of the windows. Salon “Boeing” immediately filled with the sun, and at the bottom seemed the Mediterranean Sea.

Sun and sea! For the St. Petersburg soul, tormented by the lingering autumn-winter spell, these two magic words are like a password to heaven! From October to March, go to any apartment from Kupchino to Ozerkov and ask its inhabitants what they most want right now, and for the thousandth time you will hear: “The sun and the sea”!

The earth seemed far away. Gray-brown, deserted, with scraps of gravel, as it seemed. “And this is the same, Promised,” flowing with milk and honey “? – I thought. “I wonder how she attracted Moses, and then all of these Babylonians, Crusaders, Ottoman janissaries and Roman legionnaires? For what kind of beauty and wealth did blood flow and continue to flow? ”

“Piles of gravel”, when approaching, turned into the cells of a shellfishgiant tortoise, and even closer they turned out to be… residential quarters. The houses of gray concrete merged with the ground, so it became possible to examine them only when the plane, lying on the wing, went on the turn right above the roofs. Probably, the inhabitants here not only sleep, but also walk with earplugs. And nothing in this life is not afraid.

Moses led his people in the desert for 40 years and brought them to the only place in the Middle East where there is no oil … (From Jewish humor).

Best of all, this city looks from the height of Abrashkin Park. Already funny? But on the memorial plate it is written: “AbrashaPark”. In honor of one of the prominent political figures who put a lot of effort into the creation of this park on the territory of the old city of Jaffa. Actually, this old city itself is, in my opinion, the main tourist attraction of Tel Aviv. Formerly an important port in this region, he saw various ships and absorbed the culture of many nations. Napoleon here, for example, is immortalized by two figures in full growth (although he cut out half the inhabitants of Jaffa during his capture). Ancient stone streets, picturesque terraces, souvenir shops and restaurants – this is what draws tourists from all over the world. Legend has it that it was here that Noah built his ark, and the prophet Peter received from God the order to carry Christianity into people. 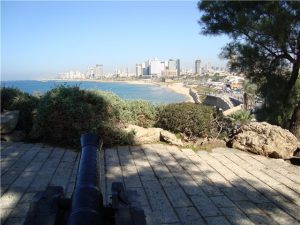 You should definitely look into the art museumIlanaGoor (IlanaGoorMuseum). It is located in a restored three-level mansion of the seventeenth century. The building itself can be called the pearl of architecture. Once it served as an inn for Jewish pilgrims, arriving by sea to the Promised Land. Now inside – a unique museum that holds the artifacts of the past, and the work of contemporary artists, sculptors. Its owner, creator is Ilana Goor, an artist who came to Israel from the USA. This house is her home, workshop, salon, gallery. He is also non-standard, like his mistress, as something that weighs on its walls or arranged in halls. And from the flat roof of the terrace offers a magnificent view of old Jaffa, the new Tel Aviv and the eternal expanse of the Mediterranean Sea. Receptions are being arranged on this roof now, tables are laid, meals are served … I recommend.

Another place in Jaffa, which can not be passed by, is a flea market. For those who like to delve into the old days and find something valuable, here is the Klondike. And next door is a completely authentic open-air restaurant where you will be fed traditional Israeli dishes: hummus, calafel, steamed vegetables and … barbecue on a stick. The prices here are quite humane (compared to restaurants in other places). Israel, as it turned out, is not a cheap country at all. Gasoline (95th) – 8.3 shekels, travel by tram – 6 shekels, the average bill in a restaurant for two – 200 shekels. 1 shekel – about 8 rubles. Count yourself …

Along all of Tel Aviv, along the long promenade stretches a sandy beach, rolling in places on the wooden boardwalk. In the summer, they say, the apple has nowhere to fall, people are escaping from the heat by the sea. And now in December – beauty. The sun caresses with cool rays, the air temperature is +25, someone else sunbathes, apparently, Russian tourists. The local public strolls along the sea, sits in open areas of cafes and restaurants. And in the clothes there is a strange dissonance: someone slaps slates in shorts and a T-shirt, others covered in sweaters and boots with fur lining. The latter explain their outfit simply: winter is already.

Surprised a huge number of restaurants and hairdressers in the city streets. Just like in the county town N of Ilf and Petrov: “it seemed that the people here were born only to shave, cut their hair, refresh their heads with the vegetar and immediately …” go for a snack. In general, they are right: the cuisine here is very diverse and very tasty. This kind of “hodgepodge” with exotic for us is Middle Eastern and traditional European dishes. Spaghetti and sushi also run. I, for example, walking in the evening along the embankment, came across a noisy get-together, where people were treated to free champagne, sushi and halvah. All this joy was in honor of the opening of a new grocery store. I said “Shalom!” And also ate.

Overall impression: the people here are relaxed and kind. Many young parents with children. On the faces of happiness. Maybe they do not read the news about the shelling and terrorist attacks? Or are the ongoing difficulties of being so hardened that they are just happy every day? Sunny today, do not shoot – well, thank you, Lord! Probably, they are right, so it is necessary to live.

A walk through the main streets of the city was somewhat disappointing: there was no zest (architectural or landscape) in modern Tel Aviv that would stop and wonder. The old “British” style is washed out with new quarters, where the gray “monolith” does not add any joy to the eye, and glass office high-rise buildings remind of Shanghai, or any other modern metropolis. In general, somehow quite “non-kosher”. 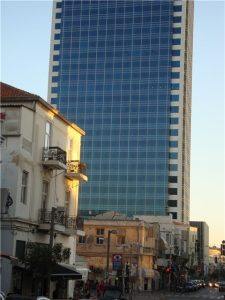 By the way, about kashrut and sabbath. Before the trip, I, of course, had an idea about these terms of Judaism. But a personal acquaintance, I confess, was somewhat surprised. Shabbat, if anyone knows, comes in Israel, not on Saturday morning, but from the first Friday star in the evening sky. When we came to dinner at a hotel restaurant on Friday, something strange reigned there. First, the usually half-empty hall was now packed to capacity. Secondly, everyone was unusually smart, as if at a reception at the governor. Men wore “piles” on their tops, some even had a Talmud under their armpits. Some, by the way, recited a prayer out loud. On the tables were kosher dishes and sweet wine. In general, the situation was reminiscent of the mise en scene from the film by Roman Polanski.

But it was not all surprises. For hotel guests, who came for the first time and did not consider themselves to be faithful Jews, the concept of “Shabbat elevator” was unexpected. Actually, the elevator was the same as a few hours ago. Only now the buttons he did not press! Totally! The elevator simply stopped on each floor and after a couple of minutes drove on … In short, you can imagine how long it took the usual transfer of hotel bodies between the lobby, the restaurant and the residential floors. Some bodies were very unhappy.

And the whole thing is in the rules of the Sabbath, recorded in the holy Torah and forbidding the Jews to set fire on the Sabbath, change the shape of objects and much more. Pressing an electric appliance button, for example, is considered to be a kindling of fire … In general, the Israelis complicate their lives fairly, and they themselves agree with this. But on the other hand, they say, this is part of national self-determination, i.e. that unites the people. What is there to argue ! 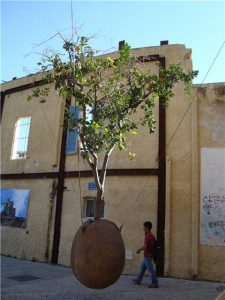 Tourists in Israel are loved and appreciated. Several times I was escorted almost to the place when I asked for directions. Just like in cultural Petersburg. But besides the innate Jewish desire for mutual aid, there is an economy. The Israeli government mostly thinks about it and reminds citizens from a television commercial: a pretty Israeli woman lies with a machine gun, and she is told from somewhere above, “We didn’t ask you to sit in ambush. You can help the country differently. ” And then there is a vigorous appeal to all viewers: “Every 100,000 foreigners bring 200,000 shekels to the Israeli treasury. Invite a friend to the country! ” Then comes the website of the Ministry of Tourism, where you can find and fill out an official invitation to a foreign guest in Israel.