From June 14 to June 15, these days were very charged with emotions. We had to recover the visas of a Moscow company, but nobody could bring them that day. There was a company in the city that brought them from Moscow in 18 hours and cost 800 rubles. Therefore, I will write contacts to all about the future: City EXPRESS, st. Red Army 15 tel. 221-35-94; 221-57-72

On the way, the girl rocked and she slept almost all the time.

10:20 – Kemerovo. We stopped for a while, called home in Krasnoyarsk , from a megaphone 1 minute – 12 rubles. Arrived at Kemerovo, there is first of all a part of a town like Emelyanov , and after having crossed all the groves, you arrive at the city center. The houses are beautiful, everything is green. The city was delayed by 2 hours. The next town is Leninsk- Kuznetsky , then Zalesovo ( Altai ). On the way to LK, the traffic police slowed us down to speed up, but let go of them 🙂 They say, “A fine of 100 rubles … you go there? Well, drive then.”

Time 2:15 pm in Barnaul still 272 kilometers. On the way, we caught the Kuzbass wave , we went there, we had fun))) My daughter took an MP3 player with her, she is sitting in her helmet all the time; D

There is a beautiful view of the highway, we drove on the bridge over the treetops, and down the cliff .. very beautiful)

We are in Barnaul. On the way to the city, in a traffic jam on the Ob Bridge, it was scary.) The bridge is big, it is swinging.

A stream of cars passes through one, first in one direction and then in another. And all because of the fact that the Lada faced the cops face-to-face. Arriving in town, I went to a local store, bought a snack on the road, threw money into my account. Leaving the city, we stopped near a huge hypermarket of building materials, while my wife and my wife were poking around, I slept an hour in the car. We are already on our way to Rubtsovsk , the border town, with the departure time. In general, 1065 km are covered.

June 17, the second day of the trip. That night, they crossed the border of Kazakhstan: no international passport is needed to cross. It turns out we were lucky, we only waited for the border for an hour and a half, just because the buses were the first to pass. After the registration, inspected the car and the suitcase. We went abroad to Russia, insured the car (such as OSAGO) and went to bed because we were very tired on the road. I woke up at 7 am, looked out the window and there was already a row of cars, everyone was walking around, fidgeting ..

The city to which this Semipalatinsk ( Semey ) should arrive. Arriving there, I woke up my daughter, stuck a sticker RUS on the chest, tied and entered 🙂 In a foreign country, we feel a little bad) The city center is beautiful, I liked the bridge.

At this moment, we arrived at the bank to exchange a few dollars for tenge , because the service stations only charge the tenge . And immediately, the first thing we encountered was a different time zone with Krasnoyarsk with a difference of 2 hours. All banks are closed, people only go to work. Russian SIM cards are not used, but not Kazakhstan. I had to pick up where to buy a SIM card, in fact, they are only sold to its citizens. Well, without suffering for a long time, I conquered a Kazakh girl and she sold a 500 tenge documentless SIM card called ACTIV. We saw a car similar to a Honda Odyssey , only there in Shatal ). On the way to Georgievsk , we stopped in a cafe on the highway. We ate very tasty for only 1400 tengues for three, our money is 280 rubles.

Well, here we drove Georgievsk , the next stop Ayaguz ( Ayagoz ). The road that leads there is just not the end, not the edge, everything went and went.

We stopped on the highway to eat some delicious skewers of lamb, just for 500 tenge / pcs . 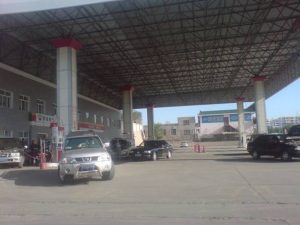 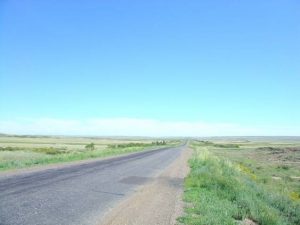 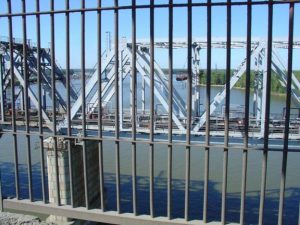 All day, heat, all the way drank, when he finished, I had to drink Kazakh tea. In Kazakhstan, we are already in Ayagoz at 17:04. We went to a store. The Kazakhs asked us where we were when they heard that Siberia was moaning and gasping for a long time 🙂 On the way we were greeted by the migration department of the traffic police station. We checked the documents. Traffic officers were stripped for driving without lighthouses. Already 1728 km completed.

At 8:21 pm Kazakhstan time. On the highway to Bakhty , we stopped to take a break, grab a snack and hit the road again. It’s very hot here +45 in the shade; DD The nature of the border is beautiful, the mountains are distant, even if there is only one steppe, but sometimes we meet trees. The road to Bakhty is beautiful, it was once greeted by roads where repair work was in progress, how to get to the village in the waking state, the red asphalt is on the road, why not unclear After a few hours, we arrived at the border … and we were late. On Friday, the border closes at 16 hours. And we arrived at 9 pm And for the weekend, the border is also closed. So they spent two days in Kazakhstan.

June 18th. Border guards advised us to go to the Makanshi Regional Center . Found here a hotel, set up for a day, showered in a bath for 60 rubles for our money. It was such a pleasure to go to bed for the first time in three days: He settled down, took a shower, got together and went to eat at the local Khalida cafe , eating only 3,200 tenge (600 rubles) for three. The portions were so big that we left we could not even grow the salads) This afternoon, we visited the market to buy fruit in the room, saw bananas .. discovered the price .. it was just a shock, 20 rubles for 1 banana. 1764 km. passed from Krasnoyarsk . In the evening, we went to the store and spent only 500 rubles. We bought a lot of cognac. We bought Kazakh mother-of-pearl cognac for 160 rubles 5 *.

June 19 We have 3 days in Kazakhstan. In the morning, we woke up and saw the complete hotel of the Kazakhs. They are very friendly, wished hello, and when they left, they wished us a good trip. Today, I decided to get a haircut at a local barber, it cost me 300 tenge (60 rubles). My daughter has already learned a few words in Kazakh: shashtaryzh , dukeni and ashik (hairdresser, shop and coffee). We learned that the word ” Altyn ” translates to “gold”. In general, people here are all good, although many do not understand Russian, and we must explain. In the afternoon, we decided to go to Alakol , we introduced it into the browser. In general, he took us somewhere in the jungle along the old road, the road being a washboard. She deported herself sharply. At first, I drove, then my wife sat, then my daughter decided to leave (17 years old for a child). On such a road, legs and hands were already vibrating,

We drove quietly to the border, immediately drove to the parking lot. Upon arrival, they saw a house named after the garland “Wu Juan”, met the owners, an excellent man.

I learned that we had arrived from Siberia in the area since Friday, I am very indignant at the fact that we did not stop with him, he had his own fishing ground, excellent food … we would have spent the weekend. Through his wife, we agreed with the taxi driver Hairat , who would join us on the Chinese side and drive us to Urumqi. In general, you can live at home, for example, like us, who were late for the border. Half of a house rents 1000 tenges to a guest + 5 meals a day))). They left the car with them for a penny, we were offered such a sum at the checkpoint.

June 20 In the morning, on waking, drinks coffee. Juan threw us at the border gate, sat down, waited for the bus that will take you to the checkpoint. A bus arrived, people, when they arrived by plane with their suitcases, we were there like a sprat in a bank. We checked the passports and went to checkout. We gave them 1,500 tengues to go by bus to the points and the Chinese border. In general, we arrived there, checked our passports again and went to the building to check in to get to the Chinese border. We were lucky with the fact that the Russians were allowed to enter, we examined our bags thoroughly, using an x-ray. And I was asked at all borders if I had recently changed my name, if I had asked where I came from, I did not go to shave and I thought there was a kind of terrorist; We went to the Chinese border. We went to see her and checked the passports again. All the crush probably on Monday.

On the way, we stopped in the town of Black Oil , our driver went to eat. While he was eating, my daughter and I went for a walk. Make yourself comfortable to talk. To the left of the car and again delighted, it smells spicy food, it is hot outside, the Chinese smile). In short, they went to the liquor store, the gunshots started there, they do not rummage at all in Russian. I write on a piece of $ 1 = Yu ? they offered me a cigarette), while I was asking for vodka, they immediately took it out and brought it; DD always knows what it is)). They honestly say they have alcohol at 52 and 70 degrees. Okay, they did not torture them, left from there and went to the pharmacy). When you enter, your nose immediately smells of various herbs. In principle, you can take care of medicines, there are Russian medicines, as if you understand the image, and the names are true in Chinese). The driver ate and we continued.

Many people use gasoline, because it’s totally free for them, they get out of the car, so it’s accepted. And wait for the driver’s support, we were at first silence, eyes fixed on us all like the Russian time that saw a ghost, D then we started to laugh, they are still in Russian do not understand)). I entered the car, continued. Before Urumchi, 300 km more. their time is 4:19. We drove the road for a small amount of us and we only gave 800 yuan. Passing through various villages, villages, plantations just a lot), just what you want)) and after a while, they stopped again near the petrol station, got out of the car. As in the mausoleum; D The girl was awake, she was asleep, went to a cafe, thought about buying water, she was sleeping at the cafe and there are rubber blinds that she had fun, she started to complaining about feeling everywhere) really does not smell like rubber.

In the same category
TIPS FOR EATING HEALTHY TRIPS